iFortress is an engineered solution that alters the paradigms of what our market has been forced to accept by comprehensively aligning the delivered solution with the demands of the market in terms of speed of engineering and deployment, adaptive design, spatial elasticity, durability, sustainability, stability, optimizations, fiscal and environmental efficiencies, scale, conservation, and security.

A factory finished solution, iFortress is manufactured in accordance with a rigorous Quality Control/Quality Assurance program. iFortress eliminates the uncertainty and inconsistencies associated with labor and materials while greatly simplifying the methodologies needed for the deployment of today’s mission- critical facility. iFortress is precision in motion, a unique concept unmatched in its industry. iFortress’ advanced technology has taken a quantum leap in the evolution of construction technology and is currently being utilized to protect mission critical installations within the U.S. and abroad.iFortress redefines the site selection process by broadening the field of possible considerations. This includes sites that were previously thought to be infeasible or too vulnerable for mission critical use.

“C” and “D” class sites that bring significantly lower real estate costs and are typically closer in proximity to power and bandwidth infrastructures were still disregarded because they were considered too risky. However, with iFortress, these sites have now become extremely viable alternatives.

Because of its inherent performance and security properties, iFortress greatly reduces the costs normally associated with demolition, pre-construction upgrades, or leasehold improvements that get the building ready for the receipt of a data center.

Because iFortress has redefined the concept of efficiency, security, speed, and deployment, the use of its technology opens up a wide array of site considerations to include standalone, exterior locations, upper floors, basements, roofs, warehouses, even underground engineered facilities – caves. The assembled MCF Series iFortress™ is light weight, typically only adding 30 to 40 Lbs/Ft, engineered to minimize weight loads and resulting in its ability to be installed on upper floors or even rooftops with minimal structural re-enforcement.

iFortress is not a capital or leasehold improvement. It is removable, able to be relocated and from a permitting perspective is considered to be a minimal interior alteration, which simplifies and even expedites the permitting process and helps accelerate the schedule. 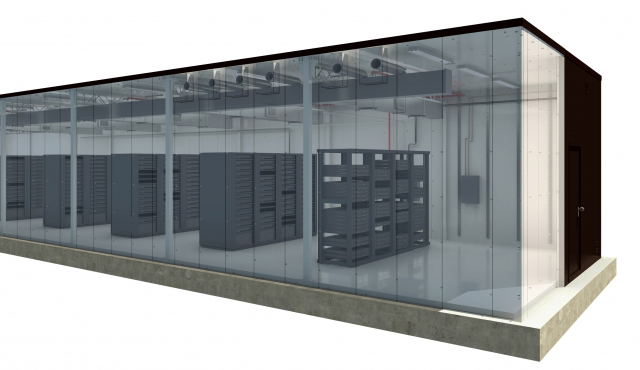